The Kemsley Manual of Journalism

The Kemsley Newspapers group was in 1950, when this book was written, a significant force in the British press market. It included the Sunday Times, the Daily Graphic, the Sunday Chronicle, the Daily Dispatch and a number of provincial newspapers. The group was owned by Viscount Kemsley, who wrote the introduction to this volume. 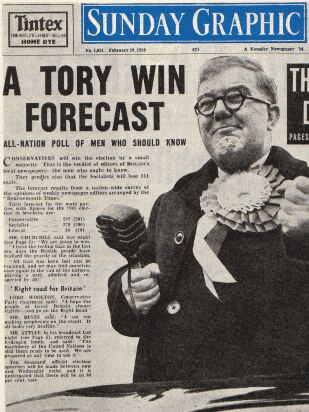 Essentially, this is a promotional exercise under the guise of providing useful information to the aspiring journalist. What is especially amusing is the tone of pompous self-righteousness which pervades many of the articles, contrasted with the awfulness of many of the actual pages and pieces reproduced for our instruction. For example, here is an extract from 'The Editor':-

But public trust has to be won. The readers' first feeling is apt to be suspicion: it is slowly that confidence grows. The honest newspaper, like the honest man, is reluctant to declare its rectitude. It will be judged by its conduct. If it prints the news without twist, if inadvertent errors are frankly corrected, if comment is fair, then readers soon begin to give their trust and, in time, give it generously.

Now compare these noble sentiments with the actual front page reproduced here. The 'Tory Win Forecast' refers to the 1950 election, which in fact the Labour party won, though not overwhelmingly. So who were the 'Men Who Should Know' who were polled for their opinion? They were in fact provincial newspaper editors, hardly an unbiassed sample. One of the sub-heads reads 'Right road for Britain', over a quote from the Conservative Party chairman. And the photograph illustrating this clap-trap says it all, with its heroically-presented (albeit rather unprepossessing) Tory campaigner: obviously 1950s newspaper journalism was like much of today, especially at election time, little better than straight party propaganda.

Also of interest: the article on Foreign News was written by one Ian Fleming (yes, that one), and the one on cartoons by the veteran cartoonist Osbert Lancaster. But the real gem is an hilarious long and pompous article about the importance of correct nomenclature when referring to titled individuals, of which the following extract should give the flavour:-

Do not use the form 'Sir John Bohun, Bart.'. 'Bart.' seems to have acquired a slight tincture of the ridiculous and is generally disliked. 'Bt.' is the form preferred.

Except in the most formal documents the style 'the Rt. Hon. Lord Blank' is unnecessary. 'The Lord Blank' is sufficient. The point is that the words 'Rt. Hon.' in front of a peer's title mean nothing. Every peer beneath the degree of marquess is now accorded that designation. As a prefix to the name of a commoner, the words indicate that he is a member of the Privy Council; it is not so with a peer. Incidentally, there is no need to put 'P. C.' after a man's name if you have already styled him 'The Rt. Hon.'. That prefix in itself is a sufficient indication that he is a member of the Privy Council.

While on this point, it may be useful to refer to the growing practice of inserting the letters P.C. among other letters, following a man's name, denoting membership of orders of knighthood. This is quite wrong. Because in the Table of Precedence members of the Privy Council are given place after Knights of the Garter in England and after Knights of the Thistle in Scotland, one sees P.C. inserted after K.G. and K.T. and in front of other knightly initials. Thus you will see the King's brother described as H.R.H. the Duke of Gloucester, K.G., P.C.. K.T., K.P.' G.C.M.G., G.C.V.O. While the other initials denote membership of orders of chivalry, a Privy Counsellorship is a post and not an honour in the sense indicated by the other initials. It is therefore quite out of place in such an instance as I have given.

The tone of condescension, tetchily deigning to explain what rahly one should simply know, is absolutely priceless, is it not?

Press Girls 'In The Club' 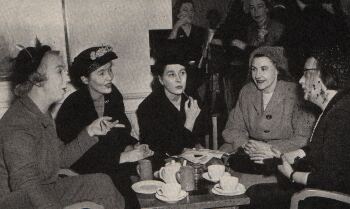 The picture shows a group of women journalists taking tea at their London club. Love the headgear, ladies!

I have a first edition copy

I have a first edition copy of this book, 1950. Good condition, no fly cover. Anyone interested?

this is my families history..

this is my families history.. they were the owners of the newpapers at that time and my great grandfather started up kemsley newpapers

I was reminded of this book

I was reminded of this book when reading Joseph Connolly's "Modern First Editions, and noting the reference to Ian Fleming. I picked up a copy of this years ago in a charity shop, signed by Viscount Kemsley (signing as 'Kemsley') in ink (there is a slight reverse image on the facing page). Part of my small collection of oddball signed first editions (mostly acquired in charity shops - my favourite is a signed copy of Anthony Burgess' "A mouthful of air which cost me £1!) I note that there are currently 4 copies on ebay, three at £30 and one at £43, although I doubt they will fly off the shelves at that price. I haven't looked at this for years: I have far too many books (!?) and it's on a shelf somewhere, although I recall it as being quite interesting as a depiction of the old way of doing newspapers with many interesting photos. Deiniol ap Deiniol.
Submitted by Anonymous (not verified) on 21 Oct 2008 - 21:49 Permalink

I've a second edition copy of this book which I picked up eons ago when I started in newspapers - original cost 25' net!
Submitted by Alfred Armstrong on 22 Sep 2008 - 20:43 Permalink

Would the previous commenter

Would the previous commenter get in touch with me directly please, using the contact form on this site? It's at http://oddbooks.co.uk/contact

I have a copy of this book

I have a copy of this book which belonged to my late husband who was a journalist with the Express Group. It is a book I will never read, is it too good to give to a charity shop or what?
All comments