The Loves of Liberace 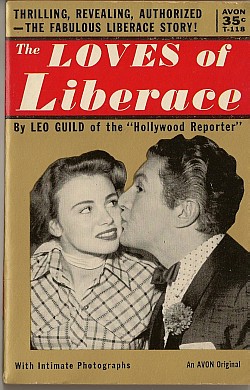 Ah, yes, the good old days, when men were men, even men like Liberace. This is a patchy, half-hearted attempt by pulp hack Leo Guild to paint one of the campest individuals ever to pound a gilt piano as a rootin' tootin' real feller, a ladies' man, a genuine 100% testosterone-fuelled pussy-hound.

Just look at that cover. Miss Coraleen Jurian - according to one internet source the former Queen of the Grand National Livestock Expo, and another a "sexy cowgirl" - really looks like she is enjoying his embrace, doesn't she? Or maybe it says "I wonder where he buys his foundation".

The keyboardist extraordinaire, who lives with his mother and designed her room in a "luscious combination of dusty pink and gray", has allegedly been engaged three times, but is as yet unmarried. Not ready to settle down. then?

"I guess I am not unlike the sailor", Liberace said with a saucy wink, "with a girl in every port".

In fact a close reading reveals that the true "Loves" of Liberace are his mother, interior decorating, cooking, questionable fashion, music, and his fans.

Despite his repeated assertions of interest in the fair sex, the question of the star's manliness or otherwise has been raised by some, and Guild tackles it most directly:

Liberace is the perfect specimen of a well-groomed gentleman, he doesn't chew tobacco or drive a truck; but he is as hairy as Rosselini, and who has ever questioned his masculinity? He can move a piano by himself, he chops wood for exercise; and he has always, since he was a very small child, liked to be clean.

Do we live today in more enlightened times? Perhaps. At least flamboyant pianists are allowed to be gay, now. Maybe in another 50 years or so, footballers and military personnel will be out of the closet, too. And maybe at last nobody will care very much what anyone does in private, if such a concept still exists.

For a more unkind, if ultimately misfiring, view of Liberace, check out Liberace v. Cassandra.

New! Show yourself to be a well-groomed perfect specimen with a Loves of Liberace t-shirt from the Odd Books shop.

Oh, yes, Liberace did love cooking and interior design, and when he wasn't entertaining, he dressed down. My mother owned a PR agency in LA, and we lived within sight of Johnny Mathis's home and close to Lee's when he lived in the Hollywood Hills before retiring to Palm Springs. His Christmas parties were legendary. He adored his mother, who couldn't stand his housekeeper, Gladys (yes, she really existed), and his manager, Seymour, really disliked the practical jokes Lee liked to indulge in. I wasn't born till 1978, so I only knew Lee when I was a very young child, but he was sweet and loving. So kind. I remember leaving his home telling my mother I was going to marry Lee when I grew up. LOL There wasn't a nasty bone in Lee's body. The same with John (Mathis). Total sweetheart in every way.

In 1952 era my former now deceased wife baby sat for Liberace's brother. It was well known in both the entertainment business and among most folks in Calif. at the time that Liberace was Gay. I don't recall any serious negative comments among those I knew. We all knew that there were a fair number of gays in the Hollywood film business, including Mr. Fitzgerald, a/k/a Rock Hudson, and Tab Hunter, the singer Johnny Mathis. The only negative remarks were made about the film pulp magazines that suggested these gays were heteros when most knew they weren't. Talent that amuses and entertains does not need to make believe in real life. I enjoyed all of them, including Mr. Straight Guy John Wayne.
Submitted by Anonymous (not verified) on 27 Nov 2010 - 21:48 Permalink

"He chops wood for exercise."

Mr. Cassandra sounds like a bitch, frankly. Live and let live. I know people didn't do that in the 50's, but wow, what an intensely hateful screed he penned.
Submitted by Old Hack (not verified) on 02 Oct 2010 - 12:36 Permalink

And, for those with fond

And, for those with fond memories of the litary skills of Bill Connor (Cassandra): try Cassandra At His Finest And Funniest, a collection of (some of) the famous columnist's best work. Long out-of-print, it was recently re-published. Selections are soon to be broadcast by the BBC and author royalties go to charity. http://booksaboutjournalism.com/cassandra_2.html
Submitted by Old Hack (not verified) on 02 Oct 2010 - 09:40 Permalink

Better still, check out Crying All The Way To The Bank (Liberace v the Daily Mirror and Cassandra) at http://booksaboutjournalism.com/barker_12.html
Submitted by Francois Tremblay_ (not verified) on 27 Sep 2010 - 03:05 Permalink

Also see his horrible movie Sincerely Yours (sadly, not available on Netflix) for another attempt at making Liberace a man who has a keen interest in women.
Submitted by Alfred Armstrong on 27 Sep 2010 - 10:34 Permalink

Yes, that's heavily pushed in the book, too. And it does sound horrible, though I'd still like to see it!

Read Cassandra of the Daily

Read Cassandra of the Daily Mirror's diatribe about Liberace - now that was journalism!
Submitted by Alfred Armstrong on 27 Sep 2010 - 11:56 Permalink

Thanks Ian. A link to the

Thanks Ian. A link to the text of Cassandra's vitriolic attack has been added to the page.

It is too bad that

It is too bad that Cassandra's piece misfired. It seemed quite well written and funny.
Submitted by lovelee (not verified) on 26 Sep 2010 - 22:50 Permalink

thank you for yet another

thank you for yet another marvelous rediscovery ! for those who might like to enjoy how truly wonderful Liberace was #34 on this playlist is his thanksgiving show (a real delight) http://www.archive.org/details/Singles_And_Doubles_Singles_L-N
Submitted by anonymous (not verified) on 26 Sep 2010 - 21:29 Permalink

He was gay? Shocking!!!!!
All comments