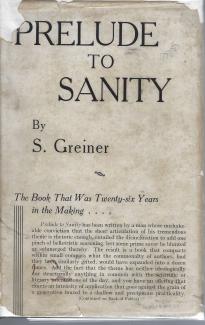 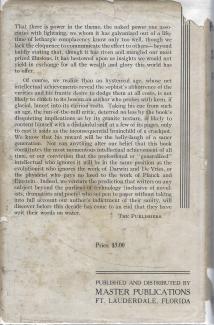 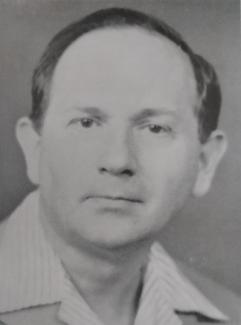 Samuel Greiner, a Floridian restaurateur, had some original notions about the human condition. Everyone else is not merely wrong but exists in a state of delusion, and until we recover our prehistoric wisdom, that's how things are going to remain. Hypnotic experiments he had undertaken using patrons at his restaurant as subjects provided evidence of this alarming thesis. This book, the distillation of his research and thinking over the course of decades, was sold through advertisements in periodicals.

One of those who purchased a copy was the poet W. H. Auden, who wrote about it in a letter to Nicolas Jenkins:

A propos of cranks I've just got Prelude to Sanity by S. Greiner who you may remember advertised himself in the Nation with an ad starting "The Piddling Nation" and including a letter from Claire Booth. Well, wait till you see the book.

No quote from Auden appears on the jacket, a missed opportunity perhaps, but it does modestly state that "this book constitutes the most momentous intellectual achievement of all time". How is it that such a significant work has been forgotten? I hope by writing this review to start the process of bringing Greiner and his work back into the public consciousness, where they belong.

The central idea of Greiner's book is that we are all mad, a problematic thesis for obvious reasons, since it implies Greiner is himself mad - and how are we to trust the arguments of a self-confessed madman? Nevertheless, at least one person was persuaded, someone identified only as 'L. W. W.", a "physician", who wrote the introduction to the book. L. W. W. was such a fan of Greiner's ideas that he believed everyone else would fall under the same spell:

Many a reader will have occasion to note that there is that about S. G.’s thesis as well as about his manner of presenting it, which at first sets our teeth on edge, then sets us to arguing with ourselves that there cannot be a particle of sense to it; but that the longer we try to undermine his propositions, the sooner and the oftener we alight upon instances in their support—so that in the end we literally find ourselves lecturing him in absentia, as though it were he whom we must convince at all costs of their intrinsic legitimacy and worth. This could not be so, if these propositions had no affinitive contacts with "substantive sanities" in all of us; and it is precisely because no one senses this more profoundly than S. G. himself, that he rarely affords us more than a glimpse into his vast cornucopia of objective documentation until he feels certain that the bare presentation of his stupendous theme has already more than half convinced us of its authentic relevance to the verities.

I'll be honest, I'm still at the "teeth on edge" stage, but perhaps by the time I've finished writing this post I'll be posthumously  emulating L. W. W. by trying to persuade Greiner of his own brilliance. (Get the ouija board ready, Cato, just in case.)

Greiner tells us he arrived at his "stupendous theme" by inward rumination and intuition. He decries conventional scholarship, and indeed the very use of words to convey ideas. Speech "has no content, no innerness, and hence no meaning". Thus "the truth has not heretofore been published because language is incompetent to deal with it". The components of language have no relationship to reality:

[...] in the final analysis, a sentence is primarily an exercise in demonology posited in the microcosmic authenticity of symbols: their magic competence to be, to do and to sustain relationships of cause and effect — so that no man can articulate one without professing a creed of idolatry.

Greiner is aware that, having written a book full of sentences, he has once again apparently fatally undermined his own argument. But don't worry, he has a Cunning Plan. His purpose is not to persuade his reader directly, no, he will instead awaken the Cro-Magnon within, a hidden primitive natural part of us all, wherein man's true understanding lies. This natural facility is where his intuition comes from, and if he can address that part of the reader, the reader will be guided to the same conclusions by their own intuitive faculty without any need to parse language. Should he succeed, presumably humanity will return to a stage in which we all communicate in grunts.

If language cannot be trusted, how is Greiner then to reach his Cro Magnon target audience? The answer is by hypnotism.

I had already schematized on paper as far back as 1922 mechanical apparatus for the induction of hypnosis that would dispense with the spoken word or the corporeal presence of the operator—it being my intent to demonstrate the automistic (unconscious) origin of all the components of the ego. But it was not until 1930, when I had attained some measure of affluence as restaurateur, that I was in a position to actualize my design and test its effectiveness. My choice of business was particularly fortunate in that it furnished me a well-nigh unlimited supply of experimental subjects.

Every restaurant should have a Greiner automated hypnosis device. Simply put the customers into a trance until their food is ready and voila! no more complaints about slow service. But this must remain a dream, Greiner never having published the book on hypnotism in which he promised to reveal the operation of his invention. This is especially sad as such a device would have other, perhaps more important, applications:

[...] hypnosis tends to immunize towards microbic infections, and to mitigate the virulence of infections contracted prior to its induction.

Not only is hypnosis useful as medicine, it can also be given as a much more radical form of treatment:

In fact, as the volume on hypnotism will demonstrate, the thirty odd subjects that are today enjoying existence with such characters as I have bestowed upon them are, by current standards, model citizens and happy creatures.

Yes, Greiner claims that he successfully altered the personalities of a number of people through hypnosis. This is possible because "all personality-differences are not biological but grammatical". An operator such as himself "who steadfastly refuses to truckle to prevailing conventions, decora and taboos" can employ hypnotic means to reset his subjects "junctions" and rearrange their "switches", transforming their characters at will.

("Darling, ever since we went to Greiner's Grill you've been a different man. What do they put in their sauces?")

Greiner is an anti-Utopian, believing that the evils of the world are caused by a "racial trauma" - by which he means a trauma visited on the entire human race - which arose when his beloved Cro-Magnons turned into Homo sapiens. (Cro-Magnon man is generally considered a type of Homo sapiens, but Greiner knows better.) Cro-Magnons were wise by instinct and had no use for thinking (or "intellection" as Greiner, who has a mania for lexical obscurantification, calls it), the very act of thinking being another unfortunate modern innovation, but Homo sapiens has lost the use of instinctive wisdom and become chronically sick. Thus doctors are wasting their time trying to make people well when the root of all ailments is nothing but Greiner's racial trauma itself, of which our social structures and civilisation are symptoms.

Reality is a hallucination and all academic endeavour is futile. Take philosophy, for example:

It is [...] my contention that philosophy radiates from profound disturbances within the racial organism—a way of saying that no philosopher, regardless of the complexion of his system, is exempt from involvement in the racial disorder. The ill are not one whit less ill because their delirium happens to be shifting from the babble of skepticism to the chatter of gnosticism, or from the manic-depressive psychosis of pessimism to the manic-elative psychosis of optimism. Racial pathologies are utterly impersonal; that is to say, they affect all of us in the same measure, though not necessarily in the same manner. It is therefore most essential that we do not confuse them with clinical pathologies, as this may create the erroneous impression that they are subject to the classifications, diagnoses and therapeuses listed in medical textbooks. That philosophy is symptomatologic of racial disorder is readily inferable from the fact that all philosophers view existence as a problem to be solved, a question to be answered, a conundrum to be unriddled; for problems, questions and conundrums hint at states of distress, such as arise in bodies affected by processes of racial erosion.

Philosophy may be defined as a Cry of Distress cortically dissipated into dialectical systems of such intricacy as to assume at times aspects of psychic harmonization. But symbolic surrogates for forfeited organismic composures can no more assuage the agonies attendant upon racial trauma than an oration can appease a toothache.

Greiner proposes no cure for the disease, which he considers will eventually heal itself in an almighty Crisis with a capital C, after which there will follow a Heaven on Earth, "a millennium of human happiness that literally beggars description". To learn more, one must consult his other published work, Crisis and Resurrection, a Prognostic of Destiny (1954) - copies of which are very scarce, sadly.

So, having read the whole thing and written this review: did my inner Cro-Magnon respond? Has the ancestral instinctual wisdom woken up? I fear not. Intellection and cortical dissipation got my bones.

Update: profuse thanks to friend of Odd Books, David Tibet, who supplied scans of a flyer advertising Crisis and Resurrection which includes quotes about Prelude to Sanity. I have added these to the image gallery above this review. As if that were not enough, the pencilled annotation reading "this is a remarkable and most provocative work" is from the hand of Henry Miller. What a find.

Character sounds fascinating. Will have to check out this book. Seems like the character was on to something, though returning to grunts probably wasn't it.

I like this guy. He sounds like a character from one of my novels, although I can't write nearly this convoluted. Another limitation to my meager talents. I might just have to quote him sometime.

I was most impressed by your…

I was most impressed by your final comment. You read the whole book?! Hats off to you. Sadly, I was not galvanized out of my lifetime of lethargic complacency, indeed, I have slipped into semi-consciousness, and that’s due to just reading the excerpts you gave us.