Entertainment for all Occasions 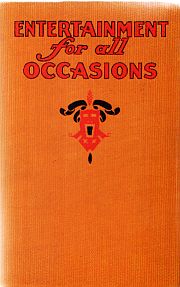 Thanks again to Nancy Beiman for this useful little book which she generously passed on to me - presumably having memorised much of its content.

Giving a party can be very stressful for the conscientious host: if those invited actually show up, then what on earth are they going to do? To avert any possibility that one's guests resort to food fighting and arson out of sheer boredom, it may be as well to prepare a small divertissement or two. And who is better qualified than Corinne Wentworth to provide the inspiration?

... an Entertainer who has supervised thousands of successful parties - Birthday Parties with the motto that “nothing is too good to be true” - Bridge Parties with “House of Cards” decorations and original rhymes - Hallowe'en Parties with “one-way tickets to Spooksville Via the Witch's Broom” ...

One quickly recognises the method of Ms Wentworth's madness, that every well-run party must have a theme. Her other rule, not articulated but readily deducible, is that the theme should be beaten to death in its application, with blunt instruments of purest corn. Take these suggestions for a St. Patrick's Day Party, for example:

Ah, to be sure, she's a divil for the crêpe paper, so she is, begorrah! That her “rugs of green crêpe paper ... last through an evening or afternoon” serves to confirm one's suspicion that her parties are not altogether relaxed affairs. One pictures her, narrowly eyeing the assembled company, waiting to pounce on anyone foolish enough to let slip to the floor some carefully-themed item of refreshment such as:

Note the subtle and original way in which Ms Wentworth evokes the spirit of a proud and ancient island race: who but she would have thought of bringing pistachio ice cream to the party?

Her talent for shallow-mindedness is by no means confined to bogus Oirishry. Hallowe'en, an event ever-popular with those bent on making their guests work for their fun, inspires her to explore new realms of crêpe paper possibility:

Make a costume for each guest of white crêpe paper. Double a fold of white crêpe paper the right length to reach the floor, cut a hole for the head to slip through, and provide a white cord or ribbon to tie round the waist. Make white crêpe paper skull caps and provide white cheesecloth masks for each guest. When the guests arrive, dress each in the white costume, then open the door of the “Valley of Death” and push one guest in at a time. Over the door of the “Valley of Death” have a placard reading:

Have a Presiding Witch, two assistant witches, and a Devil to conduct the guests through the Valley of Death...

Needless to say, the ghastly ushers are to be dressed in appropriately coloured crêpe paper. Tennyson's Charge of the Light Brigade having already been disposed of, the next victim of Wentworth's murderous way with verse is to be Shakespeare:

Stew, stew, boil and brew
All the sages ever knew,
Love and hatred, hope and fear,
Good and evil all draw near.

If the “Valley of Death” is not for you, perhaps her alternative entertainment for Hallowe'en will suit. The “Chamber of Horrors” involves covering an entire room in red, what else? crêpe paper. Guests are to be greeted by a witch, with the words:

All the chairs are wet with gore
Take your seat upon the floor!

All good fun, as are the 'fortunes' she proposes should be distributed, which include the very apt:

Cheer up, the worst is yet to come.

This motto perhaps should have been held in reserve for her magnum opus, the Aeroplane Party, with its quaintly sadistic centrepiece, “Going Up in An Aeroplane”:

Blindfold the guest, and have two persons lead her into [the room]. Have a wide, long board put on two stools far enough apart so the board will have quite a spring to it. Stand the blindfolded person in the middle of the board, placing her hands on the shoulders of the two persons who have led her in, and who stand on the floor in front of her. Turn an electric fan full on the blindfolded person, or have someone fan her, slowly at first and then furiously.

Is this covered by the Geneva Conventions? Cheer up, the worst is yet to come:

Have two people step noiselessly up beside the blindfolded person on the board and begin to spring it gently, then more vigorously, up and down, and at the same time have someone else turn the handle of an empty old-fashioned flour sifter, or sift small pebbles back and forth in a flat-bottomed sifter. Have the persons on whose shoulders the blindfolded guest's hands are placed gradually begin to stoop. All this, which is very simple to go through with, gives the blindfolded person the most curious assurance of ascending.

She fails to suggest handing the guest a themed sick-bag made of sky-blue crêpe paper, but surely that's de riguer? As she puts it, the aim of this “game” is to make the guest feel:

... in some strange place after a weird journey.

"Cheer up, the worst is yet

"Cheer up, the worst is yet to come." This has actually become one of my favourite lines to quote. People always love it.
Submitted by angie palmer (not verified) on 12 Jan 2010 - 07:49 Permalink

my mother had a old birthday

my mother had a old birthday book by Barse & Hopkins from New York and was called Shakespeare Birthday Book. do you still make them I would like one or some help where I can get one. thanks Angie
Submitted by Alfred Armstrong on 12 Jan 2010 - 13:40 Permalink

Angie, I don't know why you