Why Must Husbands Be So Dumb? 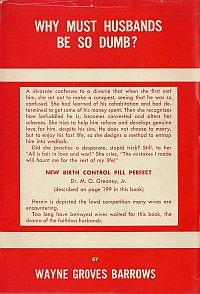 The author of this obscure work poses an important question, one that remains unanswered almost 50 years after his book was published. Why, indeed, Must Husbands Be So Dumb?

Unfortunately you are unlikely to learn any answers from reading this work. If anything you are likely to be more confused than you were previously. Before you have even opened it you will be wondering What The Hell Is Wayne Groves Barrows Going On About?

A divorcée confesses to a divorcé that when she first met him, she set out to make a conquest, seeing that he was so confused. She had learned of his cohabitation and had determined to get some of his money spent. Then she recognizes how befuddled he is, becomes converted and alters her schemes. She tries to help him reform and develops genuine love for him, despite his sins. He does not choose to marry, but to enjoy his fast life, so she designs a method to entrap him into wedlock.

Did she practice a desperate, stupid trick? Still, to her "All is fair in love and war!" She cries, "The mistakes I made will haunt me for the rest of my life!"

Herein is depicted the lewd competition many wives are encountering,

Too long have betrayed wives waited for this book, the drama of the faithless husbands.

(Just to add to the air of confusion, on the back cover there is an apparently unrelated passage concerning a fictional brothel). One can be confident from this that befuddlement will be accurately depicted within, and so it is. Perhaps realising that the book might be misunderstood, Barrows addresses potential critics directly in an introduction. One might feel that he was over optimistic in expecting any newspaper to give space to a vanity-press publication such as this, but if they did, he was ready for them:

Newspaper reviewers might criticize this book because there is too much dialogue in it.

On the other hand, too much description puts the author too much into the work.

Obviously, the reviewer who cannot accept and read dialogue makes a backward stage actor. For the dialogue of a play is both very active and descriptive. It fashions the plot.

By using too much description, there is too much lost motion while the author tells the reader how the character feels.

By using dialogue the character tells the reader how the character feels. Remove quotation marks . . . and there is the description.

That is a direct punch!

Notice how emphatically, forcibly and precisely the dialogue operates in my manuscript. After all, dialogue is description bounded by quotation marks. (Can there be a consistent objection?)

The theme of this treatise is: How divorce is caused by dumb husbands—as proved by various angles.

The employment of "dumb husbands" as the protagonists of the book, involved in the plot, might classify it as a novel.

Sometimes this book is written in the first person, somelimes in the third.

Again, any one of the parts could be called a short story or a short short. The material is just that elastic. When it is kneaded together and baked by reading, it becomes a nourishing loaf.

Elastic, indeed. His first chapter is a series of ruminations on the colour problem. If we are descended from Adam and Eve, why do some have different skin colours from others? He doesn't know, but he does make a startling prediction when in conversation with "an elderly Negress":

"... you colored folks will eventually control the votes, as you are multiplying so fast. You will elect a colored President of the United States".

She grinned in a way that made me sick to my stomach.

Oh dear. Happily, most of Barrows' work is concerned with gender politics rather than racial matters. With his capacity for going off the point, fondness for odd metaphors and malapropisms, however, it is difficult to be sure what he is getting at. At times his writing resembles the cut-up experiments of William Burroughs, though with fewer penises and giant insects. Here's a entire brief chapter for you to test your wits on. What on earth does it all mean?

THEIR MARRIAGE IS LIKE A MESS OF SCRAMBLED EGGS

The disorderly conduct of Izzy Green increases his divorce status immeasurably. His human value evaporates like artificial ice in the July sun.

This prompts his wife to appeal to a court. Divorce, although it relieves the wife, deeply upsets her emotions and fastens problems upon her; whereas the husband generally shrugs it off and contemplates that the woods are abounding with deer for his "happy hunting." The divorce is the conclusion of their intimate association; still, life must be continued. Destiny lies in the lap of the gods—sometimes it is called "fate." Their son was killed in Korea. Thank heaven, he is not alive today to witness their disgrace. The divorce consummates their marriage. Each one will move in a separate atmosphere. They are criticized and sympathized with by their friends and acquaintances, according to imagination-misjudgements. Time will iron out the wrinkles made by circumstances. Mr. Green accepts his lot in a manner which onsets his failure. Being overpowered by his sensuality, he engages in compromising acts with other divorcees, which intensifies conditions instead of subduing them.

Each participant is punished and condemned by his or her personal behavior. There is an old saying, "Two wrongs do not make a right." Often love falls into hate and justice into spiteful reactions. Other people try to be conciliatory while living separate lives. It all appears to be a mess of scrambled eggs.

Thus, once the situation takes hold, it rattles like a snake; but who heeds its warning when the outcome is "rattled"?

And consider that counterfeit relation termed "companionate marriage," in which the couple does not have children until they are sure (by what guarantee?) that they wish to stay married, or divorce by mutual consent would be permitted before children were born (provided birth control were effective).

If such an experiment were attempted, why not make it easier by common-law cohabitation? It would save the cost of a court ruling. In either case, would there be alimony? Is the beautiful institution of matrimony to be treated like a card game, with two little jokers hidden up the dumb husband's sleeve?

True, some wives naturally make their share of mistakes, but they often endure a lot of the husband's silently. Thus, they divorce him as a last resort. Previously, they really endeavored
to keep the "old ship of marriage" sailing through the storm into a protecting harbor, where the anchor of tolerance may be dropped securely.

Unfortunately, many wives have had motherhood forced upon them. They submitted to the marital situation, pretending that it was desired. So the husband feels that the wife is cold. The husband has failed to be a true lover. Instead, he asserts his legal right; whereas a true lover-boy will naturally win his wife to co-operate.

On the other hand, Hope Hathaway would not trade her maidenhood for her present condition of divorce.

Ah, but there happens to be that element called "love," and it gladly accepts all obstacles, severe though they be. So this crazy thing of life goes around in circles. For God Almighty willed it that way. It makes humanity expendable here for His Glory!

Hope Hathaway lost her daughter by pneumonia. She has no desire for another child, so she depends on birth control,

Sussie's son went as a missionary into the Congo, but she did not hear from him. Newspapers reported a case of cannibalism in the locality where he was last heard from. His mother now carries the bad news in her aching heart, but she never mentions it.

The divorcees' bereavement proves the futility of counting on a family. (The author can testify to the vanity of it—in fact, he has!) True, a family gives the greatest joy, but only to have it reversed into the deepest sorrow! Hence, how does the scale of life come into balance?

Don't be concerned that you don't know anything about these characters. Take my word for it that this extract won't make any more sense whether you have read what precedes it or not. Barrows has a notable talent for the sort of writing that is immediately forgettable, since nothing flows from one page to the next. It is like a dream that turns to a mere haze of sensations on waking. You may vaguely recall that divorce is a bad thing and that adultery and prostitution are also to be shunned, but the rest is a blur.

No, I am being a little unfair. A major subplot involving the Reverend Lovejoy [?!] taking a prostitute named Tiger Lily out of the brothel mentioned earlier and making her his wife is certainly memorable, not least for the Reverend's carrying a gun as protection against her former employers. Though he succeeds in protecting her against human foes, she succumbs to microscopic ones:

Lily was raising a fever. She was admitted into a hospital for observation.

One thing you cannot accuse Barrows of is stinting on medical detail. In another notable passage a mother breaks off a discussion with her daughter about the defects of her husband, the girl's father, to advise the girl to wash her genital region every day with soap and water. James Joyce would be proud.

Intriguingly, the Library of Congress records two other works by a Wayne Groves Barrows, Law of the Range and A Child of the Plains, published in 1909 and 1910 respectively. (The former was adapted for the cinema in 1914). Barrows says in his book that he was over 84 at the time of writing, so he must have been born in 1882 or 1881. It is not impossible that he wrote these two other works, which by their titles are probably Westerns. Google Books lists another book, from 1916, "I make all things new": a study of the Greek scriptures, which present a most surprising revelation! Is this, too, our chap? If so, why the 50 year gap in his writing career? Too busy being a dumb husband and becoming increasingly befuddled, perhaps.

No literary excursion of this nature would be complete without some rotten poetry, and Why Must Husbands Be So Dumb is no exception. I'll leave you to ponder on this fine example of the art of verse:

Here we are, just a star
On this earthly constellation.
Bright we are from afar
By expanding concentration.
Thus we twinkle, outshine
The pale full moon
By a diamond-worked mine,
With us a welcome boon!

ATE RAW WHITE MEN So I take it that it's acceptable to eat a single nonwhite woman or child, as long as they're properly cooked, but gorging on raw white men is crossing a line of good taste.
Submitted by Anonymous (not verified) on 21 Aug 2011 - 10:46 Permalink

I think more books should

I think more books should have little sidenotes about cannibalism poking up here and there out of the blue.
Submitted by Alfred Armstrong on 21 Aug 2011 - 13:42 Permalink

Yes, absolutely. And that

Yes, absolutely. And that reminds me of another book on the review pile which deserves to be added to this site. Coming soon!

For my sins I used to edit

For my sins I used to edit books for a vanity press in the UK. This is pretty typical of the stuff that was sent in. I did try to make sense of some of them, but sometimes you cannot win, or understand, so I just punctuated and left them to rot. My heartfelt sympathies go out to the editor of this masterpiece.
Submitted by Alfred Armstrong on 20 Aug 2011 - 20:40 Permalink

Gosh, if that were my job I

Gosh, if that were my job I could do for a living what I do as a hobby ... but maybe not.