My Life and Loves, Audio Book 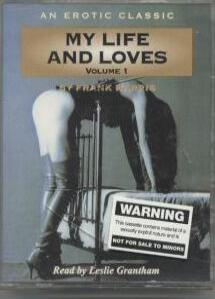 Looking for something for the weekend, Sir? How about Volume 1 of My Life and Loves read by "Dirty Den" himself, Leslie Grantham?

This must have seemed like a good idea to somebody at the time: take one of the enduring classics of erotic literature and turn it into an audio book read by a well-known British actor with a louche reputation. If you do not know who Leslie Grantham is, you are probably either not British or you don't have a TV set. He is one of the main stars of the long-running soap opera, Eastenders, a gritty, though often preposterous, drama set in the East End of London. The character he plays, Dennis Watts, or "Dirty Den", is an unpleasant womanising hood. (Grantham's own past is less than shiny, too: in the 1960s he served time for murdering a taxi driver).

The cover proposes that Grantham's voice has "a raffish edginess" that "makes him the perfect vehice for My Life and Loves Vol. 1". But in fact, his tone is entirely wrong: he sounds more like a man forced to take over an unsuitable role at the last minute, hurriedly reading the text with pauses in the wrong places, not at all the orotund, ego-stroking, practised raconteur. One of the most egregious examples is when, in describing the aftermath of the great Chicago fire, Harris says "there were probably a hundred-and-fifty thousand homeless men, women and children grouped along the lakeshore". Grantham takes a breath as though there were a full stop after "men" and thus makes nonsense of the passage.

The abridgement, by someone called Michael Armstrong (no relation, I hope), is as poor as Grantham's reading of it. It consists of cutting almost everything apart from the explicit sex scenes, to the detriment of any sense, making Harris seem even more of a sex-obsessed lunatic than he was. The cowboy adventures, which according to Harris took up 18 months of his life, but which are necessarily free of any sexual encounters, are so savagely excised that significant and memorable characters such as Reese, the trail boss, are introduced briefly and then vanish, leaving the reader confused as to their role. Indeed throughout the story anyone that Harris did not fuck is curtly dismissed.

With someone else reading it, the effect could have been very funny. Some of Harris's most hilarious lines, such as when Lorna Mayhew calls him a "wonder and delight" or when he describes his method for avoiding the terrible danger of nocturnal emission by tying up his penis with whipcord (ouch) are included in the abridged text that Grantham reads, but his reading is so flat and uninflected that they are lost.

I note that the production credit is given to Mike Leander, presumably the same one who was responsible for bringing us the notorious Gary Glitter. It would seem he did not have the budget for retakes.

This tape came out in 1994 and is not currently available, though copies turn up regularly on eBay. I wouldn't buy it unless you think that hearing one of Britain's best loved soap-opera villains say "cunt" is worth the expense: there's not much other pleasure here.